Memories in the Making- Photo Quilts

Putting Your Photos onto Fabric
I have been putting photos on fabric for over 15 years, starting with iron on transfer printer sheets, and now making my own printer sheets using BubbleJetSet2000 & BubbleJetSet Rinse. 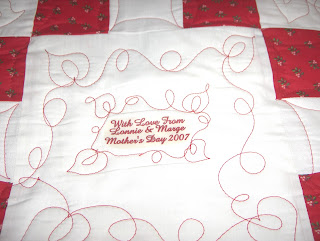 this block was done with iron on transfer...note the discoloration (ivory looking) behind the red lettering.  The above quilt was an ongoing project for my Mom-in-law, but she became gravely ill, and my hubby asked if I could have the quilt to her by Mother's day...this was on Wednesday afternoon before Mother's day...So, I rushed to get pics of all 12 of her children put in the blocks (couldn't use BJSet2000 because the quilt was already assembled)..quilted it Thursday & sent it overnight on Friday morning...she got it Saturday morning.  This was done on my old Nustyle machine that would jump time if I sneezed!  I was scribbling left and right on this.  Mom passed a few weeks later.

﻿
The first quilt I made using photo transfer sheets made for inkjet printers. You know, the kind that you have to print the image onto the transfer sheet as a mirror image (or it will be backwards), then use your iron to adhere it to the fabric. The earlier types would crack and peel, so you couldn't quilt over them, or wash them, if needed...and watch out if you have to press a seam!

Later, some companies came out with some really good iron on transfer sheets, soft, rarely cracked..but still, you didn't want to quilt over/through them.

Then came BubbleJetSet....some raved about it, some didn't like it. Being on a very limited budget at that time, I just couldn't aford to try it...I needed something that I knew would be worth the money. I tried several "homemade" solutions...soaking in heavy fabric softener (didn't work), vinegar soaked fabric (didn't work), etc. Then in 2005, I found a bottle of BJSet at my local Joann Fabrics...just the one bottle...and someone had opened it (why?)..it had leaked a little...and I got it anyway. I was impressed. I followed the directions exactly, and the results were better than I had hoped...but not perfect. 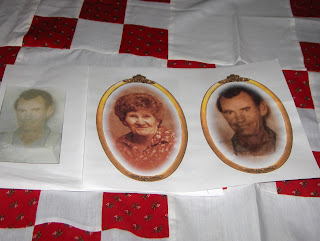 Yes, that's my Mom-in-laws quilt top under these prints...but the pics are of a customer's family.  I'm posting this pic to show how I can take a faded photo (see the print on paper at the left..that's from the original I received), and then look at the pic on the right...same pic, I just used PaintShopPro to adjust the print and added a frame in PrintShopPro.  This family wanted their quilt to look old/antique.  I tea dyed the fabrics for their quilt, and here is a pic of the finished quilt: 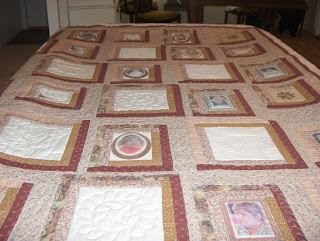 This quilt is queen size, pictures were printed two to a sheet of printer fabric (BJSet2000 treated white muslin).  I charge by the sheet, not the picture...which saved this customer a good amount. 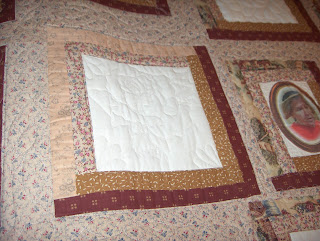 This is a close up of a block, shows the tea dyed fabrics (that pink and blue floral had a pure white background!) around the white muslin block (I got the rose motif from a coloring book!).
In 2006, I received a post from a lady who was supposed to give a class in using BJSet2000, and didn't. She had several bottles of the BJSet2000, and the Rinse...did I want them at her cost? Yes, I'd take them at the wholesale price! Here it is 2012, and I still have four of the six bottles.


Every photo shown above was done with fabric treated with BJSet or BJSet2000, except the label for my MIL's quilt.  These photos were all washed to make sure they wouldn't fade.


I didn't notice a difference in the BJSet & BJSet2000, except the process to set the ink in the fabric (BJSet2000 didn't involve heat setting the colors).


Until next time...
Marge
http://www.Lmcampbel.com
Posted by Margie Campbell at 11:30 AM

Thanks for visiting my blog! You can leave a comment here: